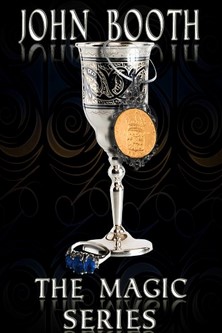 #1 - House of Silver Magic
James and Ezekiel Howard built the house in 1920 and lived there together until the start of the Second World War. They had lived in the British Isles for at least four thousand years, having brought the mysterious Source with them from Mesopotamia.

James created the six Dees as house guardians. They were designed as simple creatures that would be happy with their lot. Confined to the house, they had their own pocket universes to keep them amused when they had no duties to perform. But the Source intervened when he created Glass and alone of the Dees she became almost human. Though reflecting light like mercury in the human world, in her own world she looked like a pretty teenage girl and longed to cross the boundary and explore outside.

James's children are pitted against those who used the magic the Source had created for evil. Any precious metal or stone left in the house became magical and the Source encouraged the sale of those items out into the world. In humans, each piece would grant (in part) that person's strongest desire. The Dees were convinced that silver did not work for them because they had tried it and nothing happened. But then, they had no desires at the time except to guard the house.

#2 - Sapphire Magic: Breaking Glass
When Glass is gifted a Sapphire ring, she finds she can leave the house through reflections and is drawn to a special mirror in a mansion many miles away. There she slowly loses her powers as a Dees and becomes a human, filled with teenage emotions and desires. The Source, which is a subtle and sneaky entity, had sent her there to protect it and to make the choice to become human or remain Dees.

This time the guardians of the Source must confront big business. They face powerful men who can manipulate the world without magic, but will use it as they use everything; as if it is their God given right. Glass will meet old villains and friends as she struggles to figure out what it is to be human and what it means to fall in love.

#3 - Gold Magic: Terror in Mind
In the third book of the Magic Series, we meet Paul and Sarah; teenagers thrust together by illness and forced to get to know each other in the confines of a small hospital ward for terminal patients. The evil of the world is about to stretch its tentacles into their lives and if they are not up to the challenge, London will be destroyed. Time is running out.

Paul is rushed to hospital from the squalid flat he shares with his mother. Nobody knows what's wrong with him, but everyone suspects his mother except Paul. He knows she could never deliberately hurt him. Time means nothing as he slips in and out of consciousness, never really waking up. He hears voices, some nice and some whispering of their plans to do something terrible.

https://workupload.com/file/4rW3AZzZBSf
If you download books, please consider
becoming a supporter