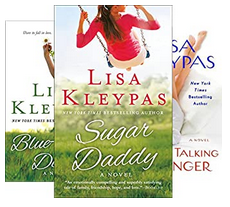 Meet the Travises: Gage, Jack, Joe & Haven.
Set in the heart of Texas, this sexy contemporary series chronicles the love lives of the members of one of the wealthiest clans in the Lone Star State. 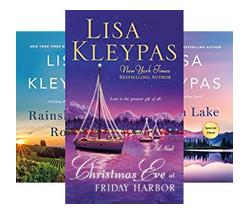 The Friday Harbour series of women's fiction novels is set in San Juan Island just off the Washington State Coast - romantic and varied, with rocky shores, sandy beaches, rich woodlands and pasture land - and the prosperous Friday Harbour area. The series is centered around the Nolan family 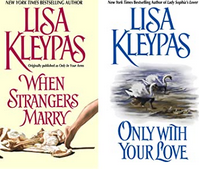 1. When Strangers Marry (Aka Only in Your Arms)
The novel opens with Lysette Kersaint being beaten by her stepfather for daring to defy him. Lysette is being forced to marry Etienne Sagasse, a man she finds loathsome. This is early 19th century New Orleans, though, and Creole women are merely the property of the men in their lives. Seeing no other way out of this desperate situation, Lysette flees into the bayou.
A few miserable days later, she is found by Justin and Phillipe Vallerand, the teenage sons of a wealthy plantation owner. They are described as being around the same age as the heroine. The twins bring Lysette home to their father, Maximilien Vallerand.
Max can hardly believe his luck. Many years ago, Etienne had an affair with Max’s wife Corrine and when she turned up dead, all suspicion fell on Max. Although he was not charged with the crime, Max’s reputation was forever ruined. Now with Etienne’s fiancee in his grasp, Max plans to return the favor, sullying Etienne’s honor and exacting revenge. He’ll do this by seducing Lysette and ruining her.
Before the plan can go into action, however, Lysette comes down with Yellow Fever and Max must nurse her back to health. During the process, he realizes he cares for Lysette and offers her marriage when she recovers.

2. Only With Your Love
Lovely Frenchwoman Celia Vallerand was little more than a bride when her life veered suddenly off course. The ship she and her husband, Philippe (the son of the protagonists of Only in Your Arms) were traveling on was boarded by pirates, and even her new husband's connection to a powerful Creole family in New Orleans could not prevent the fierce brigands from casting her wounded husband overboard and claiming her as a prize. In a matter of moments, she became both a widow and a captive -- a gift for Andre Legare, a man nototious for his cruelty even among pirates. Fortunately, Captain Griffin of the privateer The Vagabond pays a fortune in ransom for Celia. But, even in Griffin's hands, Celia is still not out of danger. For her handsome rescuer arouses irresistible desires...even as fate involves them in a deception that endangers both their lives. 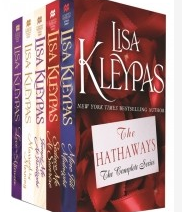 https://krakenfiles.com/view/3TIgC9dYuq/file.html
If you download books, please consider
becoming a supporter