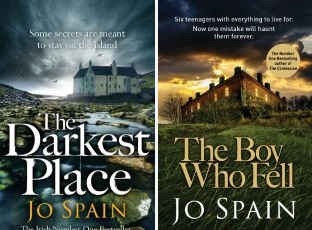 4. The Darkest Place
Christmas day, and DCI Tom Reynolds receives an alarming call. A mass grave has been discovered on Oileán na Caillte, the island which housed the controversial psychiatric institution St. Christina's. The hospital has been closed for decades and onsite graves were tragically common. Reynolds thinks his adversarial boss is handing him a cold case to sideline him.

But then it transpires another body has been discovered amongst the dead - one of the doctors who went missing from the hospital in mysterious circumstances forty years ago. He appears to have been brutally murdered.

As events take a sudden turn, nothing can prepare Reynolds and his team for what they are about to discover once they arrive on the island . . .

5. The Boy Who Fell
Kids can be so cruel. They'll call you names. Hurt your feelings. Push you to your death.

In the garden of an abandoned house, Luke Connolly lies broken, dead. The night before, he and his friends partied inside. Nobody fought, everybody else went home safely. And yet, Luke was raped and pushed to his death. His alleged attacker is now in custody.

DCI Tom Reynolds is receiving the biggest promotion of his career when a colleague asks him to look at the Connolly case, believing it's not as cut and dried as local investigators have made out. And as Tom begins to examine the world Connolly and his upper class friends inhabited, the privilege and protection afforded to them, he too realises something.

In this place, people cover up for each other. Even when it comes to murder.

Updated Board Rules
If you have errors in your requests, it will be closed and you'll have to submit again Only 2 requests a Day Donators get 5
Top
Locked
1 post • Page 1 of 1