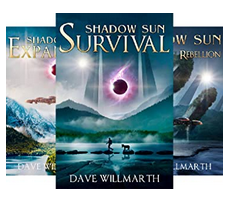 1. Shadow Sun Survival
How well would you fare if the apocalypse fell upon you? Could you survive more than a few days? Would you be able to feed yourself? Find clean water? Safe shelter? Heal your wounds?

Allistor is a gamer geek who has spent most of his life indoors, playing virtual reality MMORPGS and reading classic LitRPG books. But when Earth is seized by an ancient race wielding incredibly advanced tech, who transport the entire planet to a new location with twin suns, he finds himself fighting to survive in real life. The human race is declared a contaminant, and the new overlords decree that 90% of us will be exterminated. Creatures out of myth and legend are sent to do the killing. Dragons, titans, alien creatures big and small, all with a hunger for human flesh. Humans who survive the first year will be rewarded.

After seeing his family killed in the first week, Allistor leads a small group of survivors in their struggle to stay alive. Not satisfied with simple survival, he strives to make himself and his people stronger. The new 'magic' RPG system that now governs the planet is something he can work with, and teach others to exploit. Thrust into a leadership position, and with vengeance in his heart, Allistor aims to establish a stronghold, then take the fight to the monsters who seek to enslave his people.

Allistor and his small group push to make themselves stronger, fighting to survive the year-long Stabilization. Forced to battle increasingly stronger and more deadly monsters, they work to expand their holdings, learn better spells, and gather resources to improve their crafting.

Dungeons must be cleared, and dragons defeated. Fellow survivors are found - some friendly, some hostile. Allistor considers every human life precious, but when it becomes a case of kill or be killed, hard choices must be made. And each day brings them closer to the invasion of Earth.

3. Shadow Sun Rebellion
The one year Stabilization period has ended, and the aliens are colonizing earth! Allistor and his people have prepared as well as possible, and now they'll find out if it was enough.

Earth's survivors continue to fight for their lives, and to reclaim as much of the earth as they can for the human race. More than one alien faction threatens their existence, while others prove to be staunch allies. Allistor and company learn more about the system, its mechanics and politics, and take the first step in bringing the fight to their enemies off-world!

4. Shadow Sun Progression
Allistor, now both a Planetary Prince of Earth, and Emperor of Orion, and faces a new set of challenges. Thrust completely unprepared into the realm of interplanetary politics, he must navigate the pitfalls of dealing with more powerful races and factions.

At the same time, he strives to continue his mission to strengthen the human race. To bring other survivors into the fold, and claim as much of the earth as possible for humans. Class trainers must be found if his people are to have a proper chance to grow and thrive.

Hard choices have to be made. New and deadly enemies surface, and friends are lost. Allistor's acquisition of a particular artifact places a target squarely on his back. And behind it all, the Ancient Ones continue to meddle in Earth's affairs.

https://tusfiles.com/rq2pzie48l7z
When asked to Edit - Don't reply to the post; simply edit the original subject line and move on.

Errors in requests, will be closed and will be counted toward your permitted daily requests