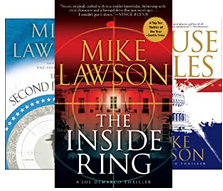 From Book 1: This tale of political suspense was one of the Seattle Times’s Top Ten Thrillers of the Year: “I couldn’t put it down” (Vince Flynn).

There has been an assassination attempt on the president. He is only wounded—but his best friend and a Secret Service Agent have been killed.

As it turns out, the attack wasn’t without warning. Gen. Andrew Banks, Secretary of Homeland Security, received a note that the president was in danger, and even more alarming, that Secret Service agents guarding the president had been compromised. General Banks is reluctant to tell the FBI about the note, partly for self-serving political reasons, and partly because he doesn’t want to damage the Secret Service’s reputation based on something that might very well be a hoax.

So he requests help from his friend, Speaker Mahoney, and Mahoney assigns his man Joe DeMarco, who must untangle the truth behind the tragedy—and assess the danger . . .

“Lawson’s debut [is] in a league by itself . . . This is high-level entertainment.” —Publishers Weekly