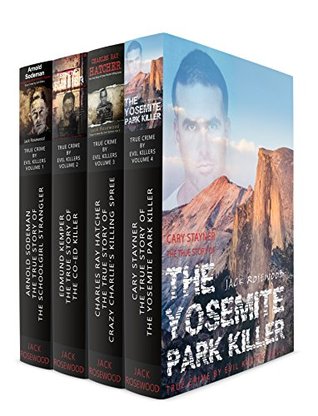 
Book 1 – Arnold Sodeman: The True Story of The Schoolgirl Strangler
This Australian serial killer went on to kill several of young schoolgirls in the 1930s Australia. Arnold Sodeman murdered four young girls with little though of remorse. Without guilt, the evil serial killer strangled them to death with their own clothing and left their small bodies alone in the Australian brush, earning himself a chilling position in the annals of Australian crime and true crime stories that would last forever.

Book 2 – Edmund Kemper: The True Story of The Co-ed Killer
American serial killer Edmund Kemper III stalked co-eds in California at the height of the era of peace and free love, dismembering his victims and tossing their body parts in remote areas around Santa Cruz.

A lust killer who savored the act of decapitating his victims - and often used their severed heads for sexual pleasure - Kemper’s story is particularly twisted among historical serial killers.

This true crime story, a detailed biography of one of the most psychopathic serial killers of our time, shares some insight into the troubled childhood and awkward nature that led the American serial killer to take 10 lives, including those of six pretty co-eds, his paternal grandparents, his calculatingly cruel mother and his mother’s best friend.

Book 3 – Charles Ray Hatcher: The True Story of Crazy Charlie’s Killing Spree
This book gives the details of the life of this lust killer right from his dysfunctional childhood and petty crimes to the brutal murders and trial. True crime stories give the right insight about the crime, the criminal, and the victim. Most of the serial killers biography tends to border on sensationalism and trashy content. This book seeks to dispel this notion and brings to you the true facts about Charles Ray Hatcher, his trial and an analysis of his psychopathic crimes.

Book 4 – Cary Stayner: The True Story of The Yosemite Park Killer
While some would say that American serial killer Cary Stayner was influenced by family tragedy – his already-troubled family was shattered when his brother was abducted for seven years and held as a sex slave before his heroic return inspired the miniseries “I Know My First Name Is Steven” – in reality, Cary Stayner’s true crime story is much more ominous.

The handsome, outdoorsy guy with a love for marijuana, nude beaches and the Sierra Nevada mountain range where he once spotted Bigfoot had been harboring fantasies of brutally killing women years before his brother’s abduction turned the Stayner family upside down.

The biography of serial killer Cary Stayner and his psychopathic crime spree leaves spine-tingling chills, because as far as the outside world was concerned, he was a fairly normal guy who found himself uncontrollably compelled to kill.

Stayner has been on death row in California’s famed San Quentin for more than 10 years, but for the families of his victims, no punishment is just enough to make up for the vibrant lives Stayner took, making him one of the most depraved American serial killers in contemporary history.

https://tusfiles.com/a19dksv9mtse
When asked to make a correction, don't reply to the topic just edit the subject line