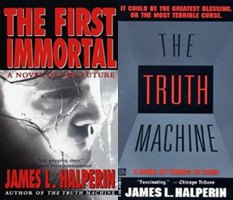 
Prepare to have your conception of truth rocked to its very foundation.

It is the year 2004. Violent crime is the number one political issue in America. Now, the Swift and Sure Anti-Crime Bill guarantees a previously convicted violent criminal one fair trial, one quick appeal, then immediate execution. To prevent abuse of the law, a machine must be built that detects lies with 100 percent accuracy.

Once perfected, the Truth Machine will change the face of the world. Yet the race to finish the Truth Machine forces one man to commit a shocking act of treachery, burdening him with a dark secret that collides with everything he believes in. Now he must conceal the truth from his own creation . . . or face his execution.

By turns optimistic and chilling--and always profound--The Truth Machine is nothing less than a history of the future, a spellbinding chronicle that resonates with insight, wisdom . . . and astounding possibility.