Suffer the Nightmare by J.J. Carlson

Suffer the Nightmare by J.J. Carlson 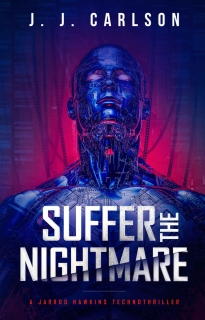 A farm in rural South Carolina has become a place of death. None who approach with hostile intent escape with their lives, for the farm is home to Jarrod Hawkins—the ruthless vigilante also known as The Nightmare.

But as Jarrod guards his friends and family, mankind teeters on the brink of annihilation. A shadow has crept into the high places, rewriting the minds of world leaders, spreading the influence of an inhuman terrorist. The New World Order has arrived, completely unopposed, and a dark army is being built on the streets of Baltimore.

Within a secret government laboratory, Eugene Carver struggles to protect a group of refugees—including his wife and unborn child—as thousands of enemies gather on the streets above. Carver and his team of black operatives fight for their lives, begging for help from their former allies and receiving none. The walls are breached, and the team withdraws deeper into the underground corridors. They prepare for their last stand, praying that The Nightmare has not turned his back on humanity.