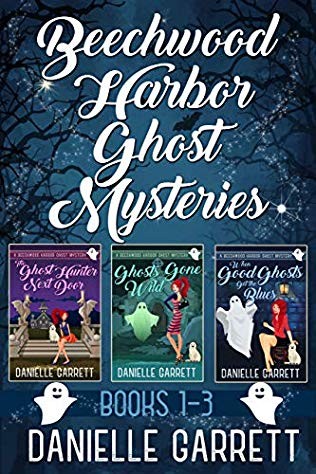 Scarlet Sanderson isn’t a paranormal being per se, but she’s no stranger to things that go bump in the night. She’s had the ability to see and speak with ghosts since she was eight years old. Whether it’s a gift or a curse is still up for debate.

She moved to the picturesque town of Beechwood Harbor to open a flower shop and start a new life after years of being a nomad. What she didn’t expect to find was a town filled with witches, vampires, shape-shifters and ghosts. So, so many ghosts.

With her sarcastic ghost cat and a stately 20th-century gentleman by her side, she can take on the world. She just wishes that world would stop landing her in the middle of murder investigations. Cold case murders, reckless poltergeists, and depressed specters are becoming Scarlet’s new normal. But how in the Otherworld is she supposed to have any kind of real life when she’s stuck halfway between the world of the living and the dead?

The Ghost Hunter Next Door
The first rule of being a ghost whisperer: Don’t tell anyone.

Sure, it might sound harmless. A fun party trick, even. I assure you, it’s not.

How do I know? Well, let’s just say that I’ve had a lot of experience with this sort of thing, and nine times out of ten, it turns into an all-consuming disaster.

Being plagued by needy ghosts twenty-four/seven is one thing; being harassed by a horde of curious — or worse, grieving — flesh-and-blood people is an entirely different circus. I mean really, who wants to hold an impromptu séance in the middle of the cereal aisle? Not me, and the manager of the grocery store probably isn’t too crazy about the idea, either.

So, that’s it. If you’re a ghost whisperer, just keep your mouth shut and act normal. Ghosts? What ghosts?

Now, if only I would start listening to my own advice …

However, it's particularly inconvenient while I'm trying to tackle my first wedding season. Between twelve hour days, an assistant with a case of butter fingers (not the chocolate kind), and the flood of tourists in town, I’m struggling to keep a grip on my sanity.

All I want is three months of peace from the spirit world.

But when local ghosts start going missing, I have to do something.

After all, it’s not like they go to the Hamptons.

Missing ghosts, a posthumously alimony-hungry divorcee, and a raging bridezilla. Yup, my bingo card is officially full. Can I get a prize and go home now?

When Good Ghosts Get the Blues.
Vacation goals…

I have them. Real life is not cooperating.

I don’t require poolside margaritas under a fancy cabana to have a good time. All I wanted was ten ghost-free days to enjoy sightseeing New Orleans with my boyfriend, to admire art galleries, listen to live music, and eat as many beignets as I can before my pants stop buttoning.

I might as well have asked Santa for a unicorn.

Within thirty-six hours of setting foot in the Big Easy, an ancient ghost warns me of a murderous spirit lurking in the city, a strip-mall psychic tells me I look pregnant (I blame the beignets) and, oh, yeah, a dead body shows up on the set of my boyfriend’s TV show and he lands himself at the top of the suspect list.

If this karma, I must have been an ax murderer in a previous life

https://tusfiles.com/jyd25rn3ewia
When asked to make a correction, don't reply to the topic just edit the subject line