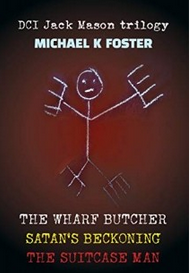 1. The Wharf Butcher
Freed by a jury in the morning. Found dead later that night.

Jack Mason loves solving complex crimes: very little stumps him. There again, the growing number of empty boardroom chairs speaks volumes about this case. The killing spree accelerating, Jack’s powers of investigation are tested to the limits and a criminal profiler is brought in. But the inner workings of this monster’s mind won’t be easy to decipher.

2. Satan’s Beckoning
A beautiful woman lies dead. . . A fatal car crash is anything but an accident.

Jack Mason soon finds himself in the middle of another volatile crisis. Within the seemingly dark vaults of the police missing persons files, young women are easy pickings for a late-night predator who has grown increasingly tired of decadence. Two brutal murders, six years apart. What links them?

3. The Suitcase Man
The truth emerges. One piece at a time.

Jack Mason had his weekend planned out, and it didn’t involve dealing with a double murder. The ex-wife of a notorious gangster lies dead, and a second body is missing. There is an underlying evil skulking the streets of Tyneside, and every time it erupts unspeakable things happen. In a race against time, Jack turns to a criminal profiler for assistance. But those who hunt serial killers must always be careful not to become victims themselves.

4. Chameleon
It was meant to be a harmless adventure…or so he thought.
When a ten-year-old boy playing hooky from school sees a young woman’s body hanging from a tree, a man at the scene gives chase.

Still recovering from near fatal injuries, Jack Mason is sent to investigate. He knows the boy’s life is in danger, but that’s the least of his worries. There's a much darker side to this investigation, and one that threatens to change many people’s lives.
What really happened in the woods that day? What dark secrets was the dead woman hiding?
And who, or what, is Chameleon?

https://tusfiles.com/kyhmpbjetlcb
When asked to make a correction, don't reply to the topic just edit the subject line