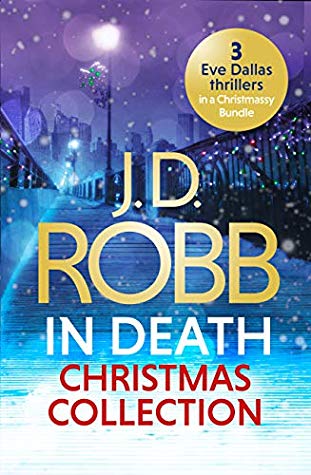 The In Death Christmas Collection: Festive in Death, Holiday in Death and Midnight in Death by J.D. Robb

Holiday in Death
She smelled it, fresh death. Both metallic and fruity. Easing the door all the way open, she found it . . .
It's Christmas-time in New York City, but homicide lieutenant Eve Dallas struggles to get into the holiday spirit. Finding a woman strangled to death by a murderous Santa doesn't help. And he's left behind a present: a partridge in a pear tree, pinned to the victim's hair. With a creeping dread, Eve watches the bodies mount and realises the key - the killer is counting down the twelve days to Christmas. And there is only one connection. The victims had been using the same dating service. Eve enters a dark world where searching for The One is fraught with terror, leaving her racing to find the murderer, as things get much too close to home.

Midnight in Death (Short Story)
Eve's name has made a Christmas list, but it's not for being naughty or nice. It's for putting a serial killer behind bars. Now he's escaped and has her in his sights. With her husband, Roarke, at her side, Eve must stop this madman from exacting his bloody vengeance - or die trying...

Festive in Death
The kitchen knife jammed into his cold heart pinned a cardboard sign to his well-toned chest. It read: Santa Says You've Been Bad!!! Ho, Ho, Ho! It's Christmas, but Lieutenant Eve Dallas is in no mood to celebrate. While her charismatic husband Roarke plans a huge, glittering party, Eve has murder on her mind.

The victim - personal trainer Trey Ziegler - was trouble in life and is causing even more problems in death. Vain, unfaithful and vindictive, Trey had cultivated a lot of enemies. Which means Eve has a lot of potential suspects. And when she and Detective Peabody uncover Trey's sinister secret, the case takes a deadly turn. Christmas may be a festival of light, but Eve and Roarke will be forced once more down a very dark path in their hunt for the truth.

https://tusfiles.com/rzfx6wu2p0t5
When asked to make a correction, don't reply to the topic just edit the subject line