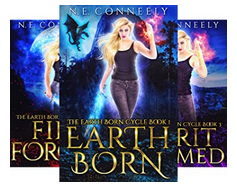 From Book 1: At twenty-two years old, Shasta Oaks finally has her first job with the family business, Oaks Consulting. However, instead of tracking down criminals, she’s in the Dragon Lands of Wyoming, teaching adolescent dragons how to behave should they venture into the rest of the country. Some groups are better than others. The current lot is not better. In fact, they keep falling out of the sky. It’s a good thing she’s half elf, half witch, or she’d have some very squished dragons on her hands.

With such a straightforward job, it could’ve been the solo assignment she requested. Instead, Oaks Consulting, or more accurately, her parents, gave her a partner. Cord is a perfectly nice elf, but he’s hiding something. So is Shasta, a secret she’s had her entire life.

But when one of her dragons goes missing, Shasta quickly discovers the job isn’t as safe as everyone thought. There’s evil brewing in the Dragon Lands. If she wants to save the dragons, she’ll have to embrace the parts of herself she’s been hiding and show the world the real Shasta.

- please consider becoming a monthly supporter. Your contribution will help us grow our community, and ensure it remains accessible to everyone