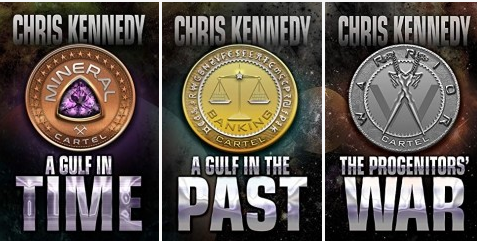 1. A Gulf in Time
With the Shaitan War at an end, Lieutenant Commander Shawn ‘Calvin’ Hobbs was able to finally complete the task given him by the long-lost Progenitors. Unfortunately, rather than getting a reward, the Progenitors’ rod was trapped, and it called the Progenitors’ ancient Enemy instead. Calvin and the crew of the Vella Gulf have now been given a choice—prepare the galaxy’s civilizations for the Enemy’s cull or become the first victims of that cull.

Calvin has overcome insurmountable odds before, however, and the crew of the Vella Gulf decides to fight. In order to win, though, they will have to answer one question that has never been answered in the history of the galaxy—how do you defeat an Enemy who can deactivate your weapons—and the artificial intelligence running your ship—at will?

Although Calvin and the crew of the Gulf have overcome every challenge given them previously, this time there doesn’t seem to be any hope for salvation. Terra’s allies aren’t any more prepared to fight this Enemy than they are, and there is no technology currently available that will let them even the odds. With the clock counting down to his extermination, Calvin will have to use everything at his disposal if he is going to find a way to win The Progenitors’ War.

2. A Gulf in the Past
Lieutenant Commander Shawn ‘Calvin’ Hobbs and the crew of the Vella Gulf have gone back in time to get the technology they needed to beat the Enemy in their present. There’s only one problem. It doesn’t exist.

Or, it may exist—they don’t know yet—but the mission has changed. Although they had hoped for a “quick in, quick out” solution, they’ve now realized that won’t be possible, and they are going to have to play more of a long game.

Having taken over the Margath system and established a base there, it’s time to go talk to the emperor, the only person who might be able to point them in the direction of the technology they need. If he isn’t mad about all the warships the crew of the Vella Gulf has destroyed. And if Calvin can convince the emperor to give it to them, even though they have nothing to bargain with.

It’s no longer a matter of being lucky or good. With the clock counting down to the return of the Enemy, the crew of the Vella Gulf will have to be both lucky and good if they are going to find a way to win The Progenitors’ War.

3. The Progenitors' War
Lieutenant Commander Shawn ‘Calvin’ Hobbs and the crew of the Vella Gulf went back in time to find the technology they needed to beat their Enemy in the present, but it doesn’t exist. They only have one option: Fight the Enemy in the past and destroy them there.

Unfortunately, the Enemy has overwhelming numbers, and—while the Enemy doesn’t have the technology the Terrans have—quantity has a quality all its own. And then there is the Enemy’s 25-mile-wide command ship. If the Enemy should finish it, they will have an overwhelming force with which to sweep the Terrans from the galaxy.

The Terrans must build—must establish the Warrior Cartel Admiral Sheppard has been placed in charge of—if they are to defend the people of the past and destroy the Enemy for all times. The Emperor hasn’t funded the Cartel, though, and Sheppard will have to figure out how to do it on his own.

https://tusfiles.com/cs0koxvfe6he
When asked to Edit - Don't reply to the post; simply edit the original subject line and move on.

Errors in requests, will be closed and will be counted toward your permitted daily requests